All is going well for Painy, but hasn’t all been smooth sailing.

He came home a week after surgery (conservative vet I think!), was on painkillers, still bandaged, initially was pottering around the yard, eating & happy.

I then set him up in my bedroom which is his fave indoor place. He could jump on & off the bed no probs at all! He was happy to stay indoors there.  Weather was a bit wet so he needed to be indoors to keep bandage dry.

But over the next few days he seemed to become less active, purring but not lifting his head much, or arching his back with pleasure when his back was scratched like he usually would. Kinda subtle differences in behaviour & I wasn’t sure if it was just that he was fed up with being bandaged! He went back to vet on day 4 at home for routine bandage check (that it wasn’t getting soggy), & maybe take out staples & replace with sutures where needed. I told them I thought things weren’t quite right. But Vet was happy with him. He didn’t remove the bandage as planned coz it seemed fine. He was eating & they thought all was good. Painy hadn’t been given antibiotics on discharge from vet as they thought the week’s course he’d had would be enough. He was home again the same day.

He was booked in at vet for review & bandage change under anaesthetic, plus staples removal, 4 days later (a Monday). By Sunday I was becoming concerned (mother knows best!!!) & would have taken him back Monday even if he wasn’t booked in. He was really lethargic, barely eating or drinking. Worse still, by Sunday night I realised I could smell not only antiseptic on the bandage, but also the unmistakable odour (I work in a hospital!) of an infected wound!!!

Poor Painy!! First thing Monday he was starting to be shivery, & lip licking a lot (= nausea?), & smelt dreadful. Off to vet ASAP!!! They discovered the wound was indeed breaking down & had infected material under it. Apparently this can happen where the skin is joined over the removed tissue, because the skin is not connected to the flesh underneath like it would be in a normal wound. A friend tells me it happens with human amputations too. So wound was cleaned up, staples removed & sections sutured where needed, a drain put in, antibiotics restarted. I visited him that pm & he was a new boy – purring & smooching & bright eyed, moving around the cage!!

He stayed at the vet for another 5 days (his new home!). I visited daily, the vet nurse made sure he got his ‘physio’ every day – a good walk out of the cage, & he hasn’t looked back! His happy-go-lucky personality has made him a favourite at the vet’s!

Finally got him properly home this week. For a few days he still had bandage on, went back just for a consult to have bandage changed & wound checked. And yesterday the bandage finally came off! He still has a small hole where drain came out, so needs to stay indoors to keep it clean until it heals fully. But he’s sooo happy to be able to wash himself properly & have a good scratch where the bandage was! At this stage he seems quite happy to stay indoors, which is unusual for him but making life much easier. He’s also smoochier than before the surgery.

So it’s been a bit of a saga, but a good outcome in the end. Wound looks weird – I’ll post a photo later – because the skin is a bit loose & fur needs to regrow. I’m sure he’ll look much better with a full coat of fur! But he’s happy & eating & moving freely at last!!

When we visit he loves to have lots of scratches around the neck & ears, & nose rubs – always his favourite t 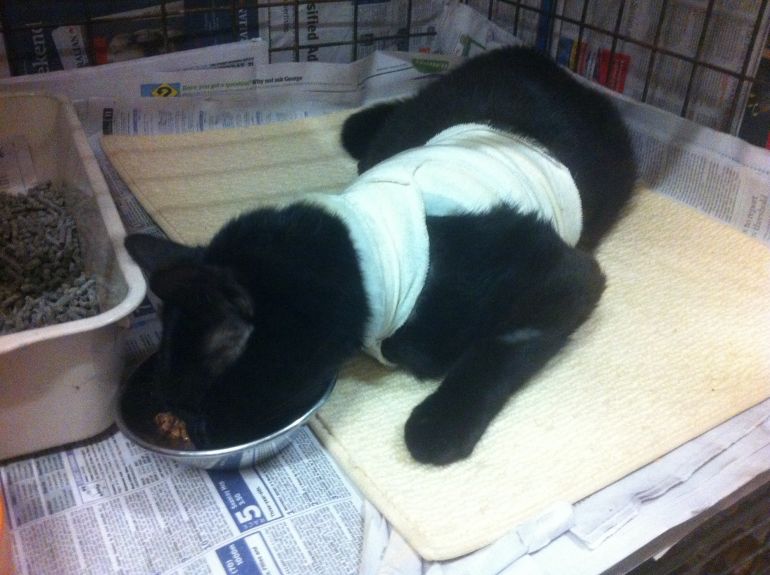 hings. He seems more his usual self, though not moving around a lot – just enough to eat & smooch!

Vet is keen to keep him a few more days though. He needed to change the cottonwool padding over the wound yesterday because it became soggy, & he wants to keep an eye on him. Painy is still on 2 painkillers & antibiotics, all by injection. This will change to oral meds when he comes home.

Painy seems quite happy with his temporary hotel booking, & gets lots of attention from the vet staff coz he’s so cute & purry!

All going well for now.

Visited the little guy this afternoon. He’s doing really well – all the vet staff say the vet did a beautiful job, & the meds are keeping him ‘chilled’, & he has charmed the staff by being such a happy, purry, smoochy little fella.
He is bandaged up securely to keep the staples safe. This will all stay for ten days or so, until staples come out.
Painy is yet to master standing on 3 legs though. They’ve put carpet in his cage to stop him slipping on the cage floor. He’ll stay at the vet until he can stand & balance to pee – un 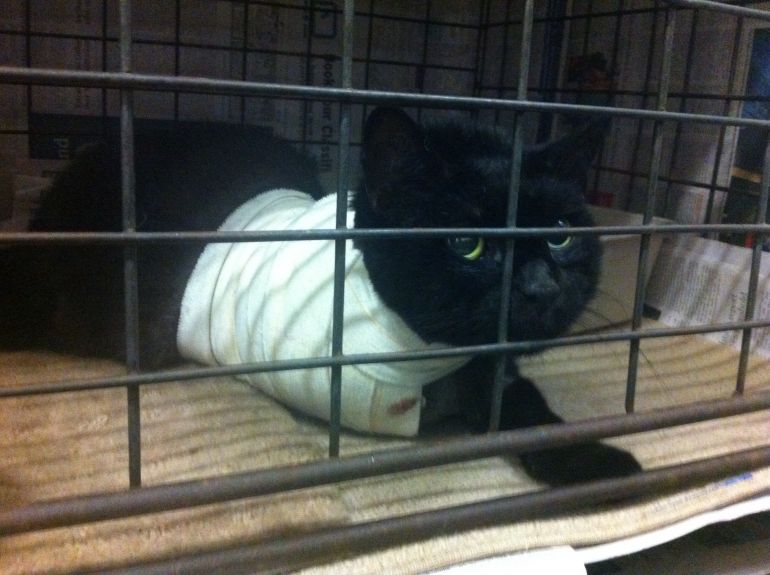 til then they might have to help him empty his bladder.
Vet suggested we borrow a big cage from them to confine him when he comes home, so he doesn’t roll around the floor & get frustrated trying to get up. Will do that, especially as we have polished boards that would be very slippery.
Dinner today was some cooked chicken (not a bad cat hotel!) which he enjoyed with a little encouragement.
It was lovely to spend some time with Painy today, scratching his head, giving him a cuddle, & snuggling with him.
Going pretty well so far 🙂
Liz

Left Painy at vet this morning & said a sad farewell to his shiny , beautiful right front paw! Weird to imagine him without it.

He was operated on late afternoon. When I called the vet the nurse said vet had done a really nice job, & Painy was quite groggy with morphine.

The plan is to pick him up tomorrow afternoon. I’m not working the next day so can play intensive care nurse for a bit!

Looking forward to getting him home & seeing how he manages. I really hope he does as well as Fang on this website, whose story inspired me especially as he is also an outdoor cat who lost a front leg.

It’s been a big week!

On Monday, I found Painy sitting in the front yard, where he likes to hang out, with one paw held up off the ground.  A couple of days before, I’d wondered if he was limping slightly & decided I was imagining things, but now there was obviously a problem.

Neither I nor the vet could see an injury, but just in case it was an infected bite the vet put him on antibiotics for a couple of days, starting off with a good dose by injection. He also mentioned the possibility that given the acute onset of pain, it could be bone cancer. I’m glad he told me so the family & I had some warning to think about this!

By Thursday, with no improvement, Painy had X-rays that showed half of one if his foreleg bones had been eaten away by cancer & was at some risk of fracture. His other legs & chest/lungs looked clear.

We talked about amputation, the vet being fairly encouraging as Painy is only 9 years old. He came home on painkillers pending a decision – amputation vs euthanasia.

That’s when I discovered Tripawds & looked up loads of info on cat leg amputations.  I was however quite uncertain – it seemed unfair to burden an already disabled cat with another disability.  Painy has been vision-impaired from birth – he can see enough to crash-tackle his mother, Mischief, and sadly also to catch lizards, but he runs into things in unexpected places (has a good memory map).  Also he is quite timid – runs away from people until he knows who they are, & doesn’t often go in our backyard with our big dog despite being quite good friends with her, because she moves quickly & unpredictably. He stays outside too, rather than encounter the dog inside the house, & it worried me how safe he’d be in the front yard.

However Painy is also a happy, very purry little guy, who seems to have a knack for survival, including avoiding conflict with other cats or roaming toms in the neighbourhood.

In the end we’ve decided to give him a chance on 3 legs!  He’s booked in for surgery on Tuesday (today is Saturday in Australia).  We’ll keep him inside in a dog-free zone for awhile & see how he goes. Sadly the vet reminds us that it is still possible the cancer has spread eg to lungs & not showing on X-ray ye

By the way, Painy’s full name is Master Pain – that’s what happens when you let your son & his friend name a kitten!  Apparently he’s named after a movie character!

Add an excerpt to your posts to provide a summary for readers in many blog themes!

Read this for important information!

Welcome to Tripawds. Please read on for important tips. This is your first post. Edit or delete it, then start blogging.

Be sure to check out your default sidebars for helpful tips to make the most out of your new Tripawds Blog!

Don’t miss our helpful WordPress tutorial videos if you need help getting started with your new Tripawds blog.

Please publish a new post (or edit this one) to share your story. The Tripawds community is only notified of new blog posts in the Recent Posts widgets found throughout the News blog and discussion forum pages. Members will not be notified of any comments made on this default first post. You can also choose to edit or delete your sample page.

NOTE: If you edit this post, be sure to modify the “Published” date and change the post author to your username from the Author drop-down menu on the edit page. That way you will be notified of any comments you receive so you can approve them.

See the Help videos or post in the Tech Support forum with any questions.

Please publish a new blog post or your site may be deleted!

Please be sure to publish at least one blog post to let us know you that you may use your blog. NOTE: Failure to do so may result in your site being deleted.

If you upload photos to your Media Library, but fail to publish a post, we’ll never know they are there and they may be gone forever!

Another way to ensure your site does not get deleted, is to upgrade it with a Tripawds Supporter subscription.

By default your site will be indexed so Tripawds members will be notified of your update in the Recent Posts lists throughout this community. If you change your Privacy settings to discourage search engines, your posts will not be indexed! If for some reason you do not want your posts indexed, consider starting  forum topic to share your story and reply there with links whenever you publish new blog posts.

To limit the amount of spam you receive, any first comment a reader makes on your blog will require moderation. Be sure to “Spam” any inappropriate comments, and approve those from your readers so their future comments appear immediately. You can change your comment options from the Settings -> Discussion tab in your dashboard.

Tripawds Blogs shall NOT be used for fundraising purposes.

Direct appeals for money to help cover care expenses will be deleted without notice. Everypawdy in the Tripawds community faces their own share of high expenses related to surgery, recovery and care. Veterinary financial aid resources can be found in the Tripawds News blog. Please see the Tripawds Fundraising Appeals Policy for more information. Thank you for your understanding.

Thank you for sharing your story, and happy blogging!